You know my impression about Dancevic from last week. I was curious to see if that was just a case and after the first games I have to admit to I started thinking my impression was wrong. Both players held easily in the first games and Dancevic was even smiling. As soon as he started missing some first serves Frank looked again spent and in a while he was break and set down. Zopp is clearly in form and full of confidence, I think he made just a few unforced errors and he is too solid at the moment for this Dancevic. So my opinion about the canadian is sadly confirmed.

I expected here a quite easy match for Dustov but I have to say we had a match. In the beginning Dustov was clearly in trouble to manage the effective backhand slice of Petz (he had some support by his doubles mate, Puetz) and the Uzbek was missing a lot. Petz went a break up but then decided to fail six serves in a row and to gift the break back. Both players alternated good shots and bad unforced errors and in the tie break Dustov took an early lead and didn’t allow the german to recover. I had to go to the other venue at the end of first set: not impressed by the level of this match. 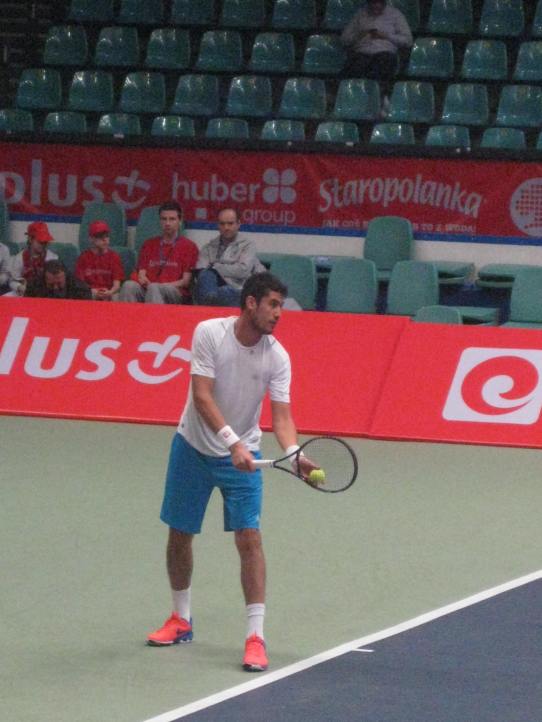 I was very curious to watch for the first time (apart from streaming) Marterer, rising player that dominated ITF tour in January.

Fucsovics last week in Bergamo was really terrible and at the start of the match he played quite bad and could not handle at all the power of Marterer. The german looked in control also in second set but he missed some easy shots on key points so he was forced to a tiebreak. He was very nervous because he knew he had a great chance here and he knew he was better than his opponent. I think he has still a pretty weak backhand for this level and surely he has to improve in shots selection: he can’t go all the time with all the power. I have to give credit to the hungarian, he didn’t give up despite being outpowered and he understood that his opponent was nervous.

I recorded a few games during second set.

And the match point

I could not watch this match, just a few rallies. Basic confirmed his good form and appeared too solid for Djere; the Serbian, when I was watching, showed a good forehand.

You have seen for the previous video that funniest thing happened on court was the service line that got broken during second set.

The dutch doubles played stunning tennis at the beginning of the match and you could easily noticed that they are a stable team with good chemistry while Motti/Desein are not. Koolhof/Middelkoop were in full control of the match, set and break up but quite suddenly the match changed and Motti/Desein had even a few chances to turn the situation around but were not so clutch in important rallies that could have given them a break point. Second set was decided by a tiebreak where the Dutch players regrouped and played better. Motti/Desein complained about a couple of line calls, pretty terrible: they were right but it’s not so easy to be a linesman on such a fast court. Good attitude for Koolhof/Middelkoop that were often smiling during the match and that at the end didn’t go immediately in the locker room but stayed on court talking about what went right and wrong in the match. I was even in the transportation with them and Desein later nd all of them looked very relaxed, especially Middelkoop looks a very funny guy.

I watched the match with Motti’s girlfriend, very nice and kind girl, we did our best to pump them up but wasn’t their day.

Motti told me that he has been impressed by Marterer already one year ago when he beated Basso in Rovereto ITF, he told Basso that he lost to a player with a good future and he was right. I even commented with him the amazing Vanni’s run in Sao Paolo, we were both disappointed about the end of the tournament but happy especially for the win over the brazialian crowd in semifinal. 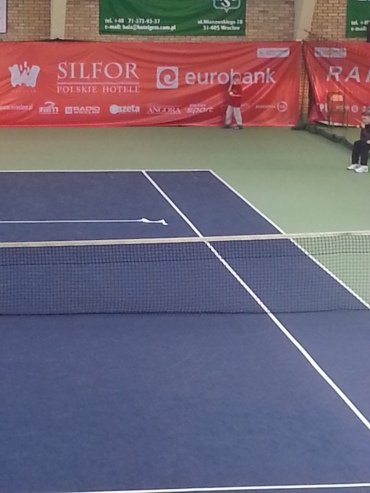 I could watch just a couple of games and the first set tiebreak of this match so no much to say, during the tiebreak the russian was quite nervous but he looked overall the better player 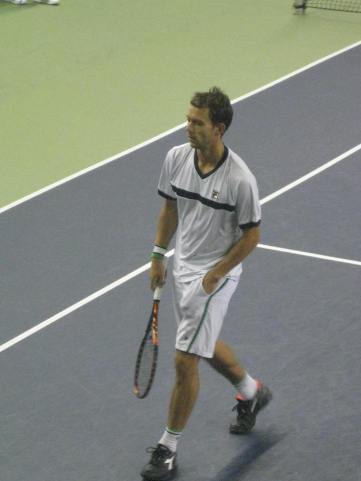 This has been by far the best match of the tournament so far. When I came back to the main venue I was surprised to see the parking completely full and a big crowd on the stands.

Both players played quite well, with ups and downs of course but the level was very high. I was told that there is a long tradition of polish players losing 6-7 third set so the outcome of the match wasn’t so unexpected. Darcis was very motivated, often fist pumping and shouting “Vamos” after every long rally won. He didn’t serve very well (especially in term of serve speed), I could notice he had strips on his abs, probably still not 100% after his recent injury. The crowd (and some wrong calls) helped a lot the polish player but I have to say Darcis played really good tennis and won the match with a great passing shot. He complained often about the ball bounce that several times didn’t look regular.

For a lover of one handed backhands and slices like me this match was really great. 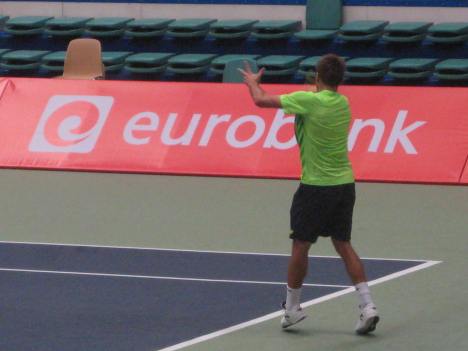 So what about the 6-7 third set loss tradition? Organizers should be very unhappy about the outcome of last two matches.

Kubot played at a nice level in first set, taking an early lead and serving very well (19/20 with first serve during first set). He looked very motivated here but Arnaboldi after the bad start played a good first set showing that he didn’t want to be the sacrificial lamb: he complained a lot about “local” line calls but you have to expect it when you play abroad against the local player. Unfortunately I had to go after first set, I have to say that after that set I was thinking about Kubot as one of the favourites for the tournament but tradition is tradition so today Arnaboldi will face Darcis.

Matches today will end earlier than yesterday because of this (I will be there): 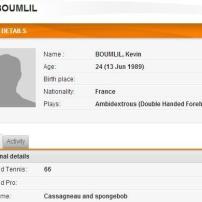 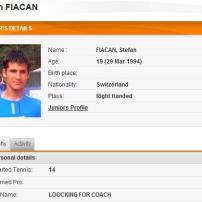 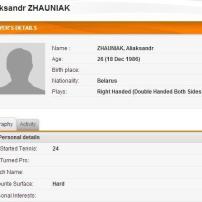